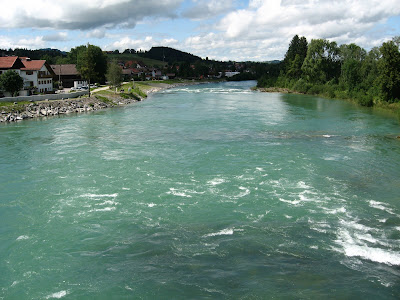 Once upon a time, I viewed German as a harsh language that I had no inclination or desire to learn except for its usefulness in the business (and music) world. Now, however, it has climbed to the very top of my list of languages I muchly desire to speak (aside from French, which I have yet to truly master). Why the sudden change of mind? Well, someday I am going to live in the German countryside, right near the Alps. 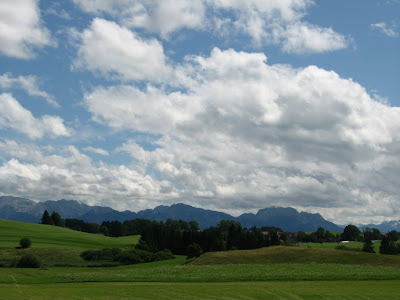 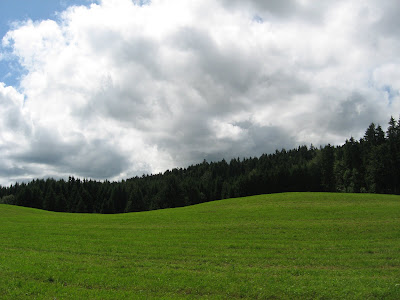 Perhaps if I marry well, I will even be able to afford a house like this: 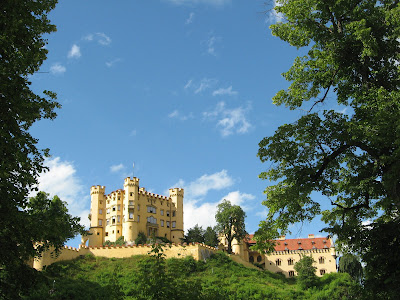 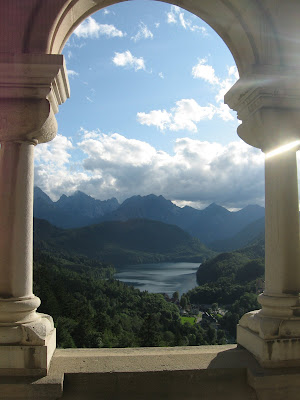 not to mention my own private lake (swans included): 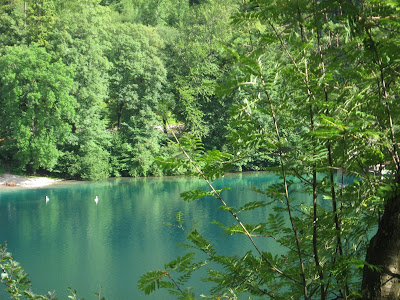 My heart is still unofficially residing in Schwangau, which means I'll need to return soon to fetch it.

FYI:
Picture 1: A small town we drove through on our way to Schwangau, the city in (or more correctly, above) which the castle Neuschwanstein is built. The mountains in the background are part of the Bavarian Alps.
Pictures 2 and 3: More gorgeous German countryside, snapped out the car window. Pictures do not adequately depict how many shades of green there are.
Picture 4: Hohenschwangau Castle ("Castle of the High Swan County")
Picture 5: Looking through a window in Neuschwanstein castle. What a view, eh?!
Picture 6: The lake below Neuschwanstein castle. Soooo pristine.
Posted by Britny Clark at 1:19 PM 3 comments:

My most humble and sincere apologies for the inconsiderate neglecting of my blog that has taken place while I have been basking* in the European sunshine.

In the time since my last post, I have nearly quadrupled the number of countries--not to mention culture and history--to which I have been exposed (oh dear, I think my English is going down the drain--being '"exposed" to a country'...is that even possible?). My European tally is now (in order of visitation): France, Czech Republic, Slovakia, Hungary, Austria, Germany, Switzerland. I've got lots of pictures to show and stories to tell, but for now, here are a few tantalizing tidbits to tide you over until I find time to record in detail the full awesomeness of said happenings:

Instead of buying souvenirs in all the countries I've been visiting, I've been going all out with the food. I have now had everything from goulash to fried cheese to wiener schnitzel, and even tried a "Nurnberger" last night in Nurnberg (i.e. Bratwurst inside of a bun, with mustard). In Hungary, my two comrades and I spent over 11,000 florints one night at dinner. And about three-quarters of that was mine. Oops. In Vienna last weekend, I spent a good 30 euros on lunch at a CAFE. Yes, a cafe. But it was worth it, because I tried Viennese sausage (served with pickles and tomatoes), Viennese chicken, and the infamous sachertorte (chocolate cake, the same cake once reserved for the emperor himself). The location of said cafe could not have been better: across the street form University of Vienna, kiddy-korner from Parliament, next to the Burgtheater (pictured below), and on the same block as Hofsburg Palace and Volksgarten. 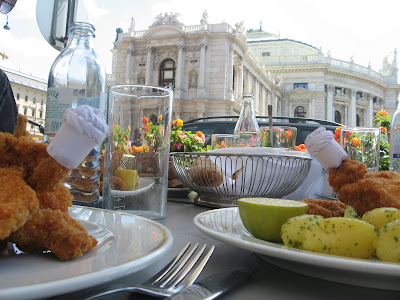 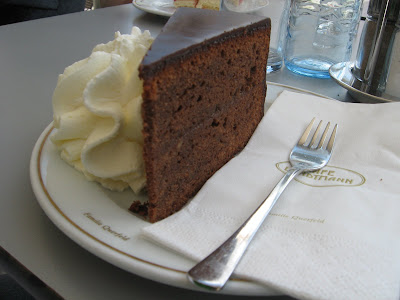 Speaking of food, yesterday in Zurich (Switzerland), I tried cheese fondue. What is cheese fondue, you ask? The most delicious stuff ever, I reply. We ordered four huge pots of it, and ginormous bowls of small pieces of bread (dashing around Zurich all day has a way of making one hungry). But a TRAGEDY occurred: we forgot to tell our waiter to make our fondue alcohol-free. So by the time we realized our mistake, all but one of our fondue pots had already arrived, and three of the four of us (thankfully, myself not included) had already begun to eat it. So in the end, we paid 80 francs (the equivalent of about 80 dollars) for the one super-delicious pot of fondue that we saved from being filled with alcohol, and which we devoured more quickly than the current world-record time for the mile (which as far as I can tell is 3:43, by the way). 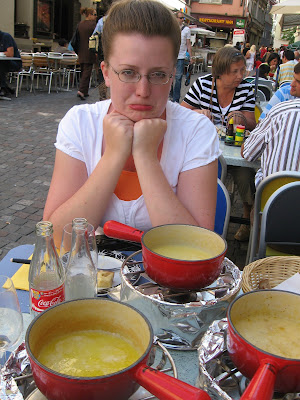 *Well, more like burning...the color of my skin at the moment would make me blend quite well in a flower shop on Valentine's Day.
Posted by Britny Clark at 1:53 PM 1 comment:

Britny Clark
I am currently planning a diamond dog-collar heist.